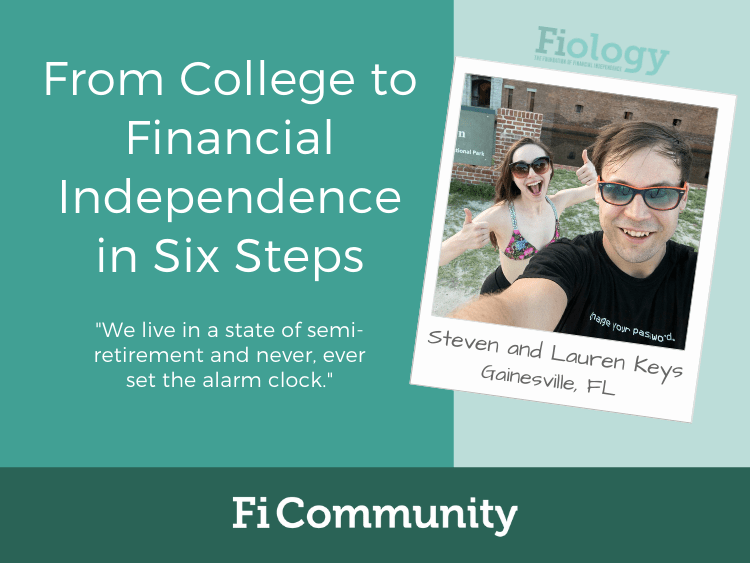 The two keys to Financial Independence everyone knows about are increasing your income and decreasing your expenses. If you spend less than you earn, you’re guaranteed to get there eventually. But the third secret ingredient to gaining freedom from the 9-5 is time.

By thinking about Financial Independence after college, while we were still in college, we were able to enter into a permanent, work-optional semi-retirement by age 29 — without either of us ever making a six-figure salary.

The common criticism of saving hard throughout your 20s is that it might cause you to miss out on the best years of your life, but for us, it was exactly the opposite. During that decade of our life, we graduated college, got married, and took over 17 months of travel time, doing cool stuff like living beachside in Hawaii and visiting every National Park and all 50 states.

With backgrounds in education and writing, we both wanted to share our story with young people and encourage them to do something similar, so we started our blog, Trip Of A Lifestyle, and drew up a 6-step Financial Roadmap based on our own experiences.

The best investment is always in yourself. For us, that came in the traditional form of going to college. At the University of Florida, Lauren studied journalism, and I studied physics.

Paying for school can be a challenge, but graduating debt-free isn’t impossible, even today. We both earned state-sponsored scholarships that covered most of our tuition. To pay for living expenses without parental support, Lauren started out waiting tables at Chili’s. Tipped positions are an awesome option for students, because they can pay dramatically more than other hourly jobs after factoring in gratuity. I had help from my parents (admittedly way less cool), and we both managed to squeak by without student loans.

College isn’t the only way to level up though. We taught ourselves skills like photography and computer programming through part-time jobs, internships, and free content on blogs and YouTube channels. We have friends who did it through trade schools, apprenticeships, and training programs. There are tons of roads to success. The key is to learn something new every day.

After school, we picked up our first full-time jobs. I worked as a physics teacher at a public high school, and Lauren did marketing for a small financial firm making a little less money than me — so we were really rolling in it, lol.

Despite our lackluster incomes of ~$38k per year per person, we were determined to reach financial independence quickly. So instead of expanding our lifestyle from our undergrad days, we cut it back even further. We picked a small apartment near my job so that I could ride a used bike to work every day while Lauren took the car, and we kept eating beans and rice on our IKEA furniture like college kids. Strangely enough, it wasn’t so bad.

Keeping our expenses in check meant that we were able to live on considerably less than one of our two full-time incomes, creating a massive budget surplus, a full savings account, and a stream of cash that needed to be directed somewhere — fast.

Over the next two years at those same lower-middle class jobs, our net worth grew by over $100,000. We invested every spare penny into boring, passive stock market index funds and watched our money grow. We were making progress to Financial Independence.

Suddenly, we had several years of living expenses in our brokerage accounts, and we realized that we weren’t actually dependent on our paychecks or our bosses any more — at least not in the short term. It was an amazing feeling. But it left us a bit exhausted.

Having recently gotten married, we figured it made sense to take a honeymoon. But being as frugal as we were, it seemed dumb to blow thousands of dollars on a one- or two-week vacation, only to come right back to work and have to save it up again.

That’s when we had a crazy thought: What if we quit our jobs and took six months off in Hawaii? At first, that sounds a lot more expensive than a little honeymoon, but we had a plan.

Instead of blowing our savings, we’d set up a small amount of part-time remote work that would pay all our bills. And because we’d be renting an apartment and buying a cheap used car instead of paying for hotels and rental cars, the “vacation” could be as inexpensive as our everyday lifestyle.

And it actually worked! By working just 10 hours per week per person doing private online tutoring and contract work for a previous employer, we were able to pay all our bills in Hawaii. So when we came back from the trip, our net worth hadn’t shed a single penny.

Since we left our jobs to go to Hawaii, we were forced to seek completely new employment when we returned. A lot of people say that a resume gap can damage your chances at making more money, but we experienced the exact opposite effect.

By being forced to job hop, we re-evaluated our worth, and we both scored jobs paying much more than before. At age 25, we immediately paid cash for a modest house, reducing our cost of living even further, and that was a recipe for extreme saving.

We attained a savings rate of 80% or more and plowed all that extra money into index funds just like before, catapulting us to financial independence at an accelerated pace.

Before getting there though, we’d take one more pit stop, spending seven months exploring every National Park in the United States. Since we were living and working out of the back of a cheap converted camper van along the way and renting out our condo while we were gone, this trip paid for itself, just like Hawaii.

By age 29, we had enough money invested that we felt comfortable stepping back from full-time work indefinitely. While we hadn’t technically reached our full FIRE number and proclaimed Financial Independence, it was clear that there was no reason to keep working so hard — we would coast our way there automatically over the next few years.

So now, we live in a state of semi-retirement, doing some part-time contract work from home and never, ever setting an alarm clock. While more travel is definitely on the horizon, we want to spend a lot of our time helping other people, too. That’s why we launched our blog — to tell our story and encourage more young people to consume less, save more, and live freer, happier lives.

By Steven and Lauren Keys of Trip of a Lifestyle