Reinvention of Self Through Financial Independence 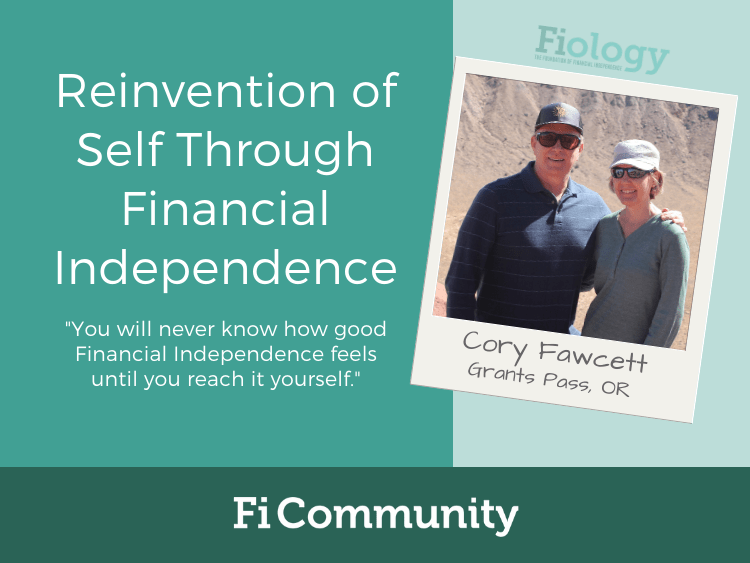 My Financial Independence (FI) story begins in my grandfather’s lap. He often read me the children’s book, Dr. Goat, which sits on my mantle today. This story is about Dr. Goat, a family doctor who makes house calls to treat sick animals. Near the end of the book, Dr. Goat gets sick, and all the animals he helped came to his house and helped Doctor Goat. I think that book had a big influence on my desire to go into medicine.

I finished my training and became a general surgeon at age 31. After returning to southern Oregon, I started my 23-year career in medicine. In medical school, I established a plan to retire at age 50. I don’t know where that number came from, but that was when I wanted to retire. I guess I was FI a couple of decades before FI was a thing. Other people in the medical field told me my plan was too ambitious and I would not be able to save enough money to achieve my goal. I’m glad I didn’t listen to them.

My journey to FI began with my first steady paycheck. How much money does a resident make? At age 26 as an intern right out of medical school, I married. I was four months into my internship and our combined income was about $42,000 a year. We committed to save half of our income and lived on the rest. This one decision is probably most responsible for my financial success: living on significantly less than we made and saving the difference.

During residency, I was only able to talk one other resident into saving money in the hospital 403(b) plan. All the other young doctors felt they needed to spend all the money they were making, leaving nothing to save. They all wanted to start saving later when their income was higher. By the time I finished residency, we were less than $4,000 in debt and had a lot of money saved in the bank.

How to Get Into and Out of Debt

In 1993, I completed training and graduated to my big boy salary. Unfortunately, I was now a target for everyone who wanted a piece of my earnings. Banks and stores were willing to lend us money for all the things a doctor’s family should have. We were soon about $500,000 in debt.

My wife was not comfortable with the debt we had accumulated and convinced me we should become debt-free. We set out on a plan to do just that. Using the debt snowball method, we paid off the smallest debt first then added the amount we were paying on the smallest debt onto the next smallest debt. We continued this process as we paid each debt off.

We strayed from the plan a little, but six years later we were debt-free! That was not “debt-free except for the house” debt-free, but truly debt-free. Making our final mortgage payment in 2001 was an incredible feeling of freedom. I encouraged everyone I came in contact with to start down the path to becoming debt-free as well. A few listened and jumped on the wagon with us, but most didn’t see the problem with having “a little” debt.

We began teaching Crown Financial Ministry classes, a 10-week Bible study on money management and escorted a few more people to their FI journey. I later went on to write The Doctors Guide book series on personal finance for physicians. The second book in that series, The Doctors Guide to Eliminating Debt, details the story of how we eliminated our debt.

What Would You Do If You Were Debt-Free?

Once we completed our snowball and were debt-free, we now needed a plan for what we would do with the money previously going to debt paydown. Since we were already living a comfortable lifestyle, we had no desire to pursue lifestyle inflation. We were already maxing out every protected retirement plan we could get our hands on. So, we decided to invest in real estate with our surplus income.

When I was a kid, my grandparents bought a rental house every few years. Growing up, I often helped when a tenant moved out by cleaning and repairing the house to get it ready for the next tenant, so I learned a lot about maintenance and repair.

What Kind of Rental Property Should I Buy?

We decided to buy small apartment complexes and manage them ourselves. Our first purchase was a 31 unit apartment that we bought for seven figures with no money down and cash back at closing. The first full year we owned it, we had a cash flow of about $22,000. In the beginning, we did everything ourselves so we could learn the ropes.

We even had our kids helping and working alongside us. After managing, placing new tenants, doing the bookkeeping, tenant closing statements upon move out, room turnovers, yard care, and repairs ourselves for the first year, we felt that we understood everything that went into running our apartment. At that point, we began to delegate tasks.

We still managed but didn’t do much of the work. There was now a groundskeeper and maintenance manager. We spent about 10 to 15 hours a month actively managing our real estate.

How to Build a Real Estate Empire

Over the next few years, we bought four more apartment complexes for a total number of rental units of 64. At that point, my wife pointed out that we had enough real estate to take care of us financially for the rest of our lives. We stopped buying and put our efforts into paying off the real estate mortgages on the properties.

Rents continued to climb and the debt continued to fall. By the 12th year, our real estate LLC was bringing in enough cash flow to cover all of our living expenses. In addition, we also had a large retirement plan value from the money we’d put into our 401(k), 503(b), IRA, and HSA over the years. I was 51 years old when I left my medical practice. I no longer needed to make a living, now I could make a difference.

What Would You Do If You Didn’t Have to Work for a Living?

I was not ready to give up medicine even though we had enough money to do so. My job was still enjoyable but I was ready for a reduced workload. Since my group practice did not allow for part-time work, I left the group and formed a professional corporation covering calls for rural small towns that only had one surgeon. I was hired to cover a surgeon’s practice for one or two weeks to allow some needed time off.

That was a great change of pace for me, and it allowed me to just work two weeks a month in various locations. Even when I was working, the workload in the small towns was so much less than I was used to that it felt like I was on a paid vacation.

During this part-time doctoring era, I started thinking about what I would do with myself if I stopped practicing medicine completely. My business, Prescription for Financial Success, LLC, was born. I took the financial message I had been teaching physicians for years, using their language, with their numbers, and developed illustrations that were relevant to doctors. I started a blog and began The Doctors Guide book series.

Instead of being a retired surgeon, I became a repurposed surgeon. I am teaching others to reach Financial Independence.

Reinventing Myself as Life Changes

I am no longer a practicing physician; I have morphed into an author, speaker, and coach. My blog continues to grow. My first three books have won awards and made Amazon bestseller status. My fourth book is titled, The Doctors Guide to Real Estate Investing for Busy Professionals. It is a guide for people who think they don’t have time to invest in real estate. It walks through everything you need to know about investing in real estate, using my actual numbers from real investments.  If I could do it as a full-time general surgeon, then anyone can do it.

We now enjoy traveling all over the world, since I can write from anywhere. The traveling is not always vacationing. It is more like living somewhere else for a few weeks. I work a few hours each day while I’m there and explore the rest of the time.

In the last 12 months, we have been on three cruises, six timeshare trades, attended two conferences, taken an 11-week motorhome trip, a one-week scuba trip, walked the Camino de Santiago in Spain for 450 miles in 38 days, three hotel vacations, while visiting 10 countries. I am really enjoying the mobility that being an author creates.

Take back control of your life and your finances and join me on this wonderful journey that is Financial Independence.