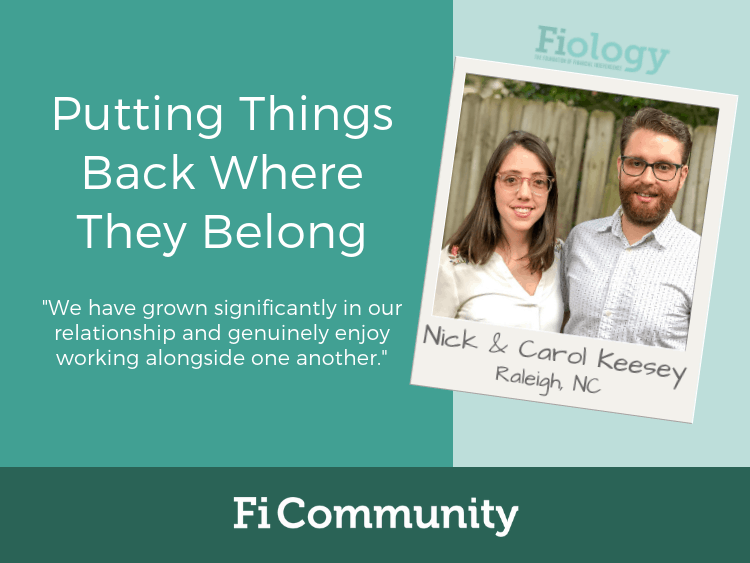 PUTTING THINGS BACK WHERE THEY BELONG

From College Dropout to…

My wife, Carol, and I met in spring 2014. She was living in Frederick, Maryland, working as an au pair, and I was a student at Penn State. A few months later, I decided to drop out of college. I did so to pursue a business I had started about a year prior—an online event ticket company—and move to Maryland to be closer to my future wife.

The pay wasn’t great, but I was my own boss, doing something I enjoyed, and the growth potential was promising.

Later that year, Carol had to move from Maryland to Raleigh, North Carolina, for work. Our relationship was getting serious, so we decided I’d follow her down there. We moved in together, getting married soon after.

At the time, I was working around the clock handling customer service and managing the business. Carol was earning money as a nanny and trying to find work as an image consultant—something she did before she moved to the U.S. from Sao Paulo, Brazil.

To say I was working too much is an understatement. I would categorize it more as an addiction. My entire identity was attached to the company. I was my business, my life was entrepreneurship, and it was intensity 24/7.

Ignorance is Not Bliss

Our expenses were still $1000+ per month higher than what we were earning, we had no savings at all, and were accruing credit card debt quickly.

Money management was never a strong suit in my family. My parents filed for bankruptcy several times during my childhood, and it seemed like we could never get ahead. I told myself that our situation was different; it was only temporary.

I was the type of person who didn’t understand or respect money. I thought you could buy whatever you want on credit. As long as you had a robust future income, things would work themselves out. Since we were always able to pay the rent, I thought everything was okay.

I was afraid to look at things critically, telling myself, “when the business picks up, we’ll pay things off and figure it out.”

About two years later, I was introduced to the ChooseFI podcast by one of my employees and close friends. We quickly became interested in FIRE, but we had so many things going on and our lives were so disorganized that even attempting to reach financial independence seemed a world away from us.

Meanwhile, my business partner and I began to grow apart, as we both had completely different management styles and visions for growth. Communication ceased, tensions were high, and things spun out of control.

I knew it was only a matter of time until everything fell apart, and I was losing sleep. I now hated my job, to which I had assigned so much value and attention for years. Carol was not happy at all with what she was doing and felt like she had given up her career and was stuck.

We had over $20,000 in consumer credit card debt, and another $150,000 in credit card debt tied up in the business, not to mention I was responsible for over $1 million of other business liabilities. I was afraid to make any controversial changes or any decisions with the company because one misstep could cause a fight and domino effect that would be hard to overcome, and we had no savings or backup plan if things went wrong.

Progress Is Impossible Without Change

It was clear something had to change, so we looked for small things that we had control of and decided to start with what was right in front of us, our home.

We wanted to downsize and declutter to make life easier and get our spending under control. We both read Marie Kondo’s “The Life-Changing Magic of Tidying Up” and decluttered our personal belongings. We had always been interested in living minimally — the idea of having less seemed easier to us than being surrounded by a lot of things.

Carol is a naturally organized person and previously organized closets in Brazil for her image consulting clients, so this was an easy process for her. I hadn’t yet learned much about the benefits an organized home and life would provide—or how to do it—so she helped me along the way.

We continued decluttering and organizing our house until we created a space that provided clarity, peace and structure. It took hard work, but the experience was life changing. We soon discovered that home organization was the ultimate life optimization.

This is when we truly got on the path to FIRE.

Everything in our home had a place to live. Our daily routines no longer drained us and we were sleeping better. We also were able to take control of our food budget, which reduced our monthly dining and grocery bill from more than $1400 per month to about $400 per month.

This new lifestyle gave us a different way of thinking about what came into our home. Now that everything in our house had a place to live—and we already had most of the things we wanted and needed—we scrutinized every potential new purchase.

Before buying something, we began asking ourselves questions like: Where will this go? Do we already have something similar? Is it necessary? Does it bring joy? And my personal favorite, is it worth the amount of time it took us to earn the money it will cost us to purchase it?

Being honest with ourselves during these questions and their answers eliminated most unexpected spending.

With the house organized and spending under control, we optimized our schedules to create maximum efficiency and began adding things to our day that we always wanted to do.

For example, Carol found space and time to sew and meditate, while I focused on my diet and exercise, losing 45 pounds in one year. We also started taking daily morning walks together and getting out of the house more often.

Once we reduced our spending to a level we felt comfortable with, we turned our attention to increasing our income.

Carol had a great idea that would allow us to spend more time together, share our passion for life optimization with others, and make money at the same time. We wanted to create a system to help people get organized, feel good about their space, and enjoy their home.

It was at this moment that The Organized Couple was born.

We dove headfirst into all the information we could find about organization and the psychological aspects related to it, consuming courses, books, articles and magazines.

Even though Carol was naturally talented with organization, we still had to learn about and understand the psychological, emotional, and spiritual relationship between individuals and their belongings. This would allow us to adequately educate them about how items are impacting their lives and help them determine what they should let go of because it is no longer bringing them value.

We then created a website offering professional organization and unpacking services, and a short time later, landed our first client. It was a young couple who hired us to unpack and organize their 7000 square foot home. We set a starting price of $85 per hour and made $6,000 in less than two weeks. From that moment, we’ve been all in on organizing, and our rates only continue to increase.

After one year of organizing as a side hustle, we paid off over $20,000 in consumer debt and put away 12 months of savings, which gave us the financial freedom to do something about my other business. The ticket business was still growing and earned over $2 million in revenue that year, which provided our household with a steady (but modest) paycheck, but it was making us miserable. I made the call to shut it down.

It was a difficult and lengthy process, but words cannot express how happy we were to be done with that business. This was a pivotal moment in our lives and would not have been possible without our website.

Shortly after, I started a new venture in the ticket industry, Seat Insiders, with two of my former employees (one of whom is the individual who introduced us to ChooseFI). My time nowadays is spent about 50/50 between Seat Insiders and The Organized Couple. Thankfully, everyone involved with both companies has the same goals of creating lifestyle businesses and achieving FIRE, so we support each other very well.

Without a doubt, the decision to start a side hustle that we could do as a couple has been one of the best we’ve made. It helped us get out of debt, we have grown significantly in our relationship and we genuinely enjoy working alongside one another. We can choose which clients to work with, when we want to take days off, and how to scale the company in a way that aligns with our values and goals.

Not only is our work at The Organized Couple incredibly fulfilling but it is also very profitable. It’s grown from a side hustle to a full-blown business and is responsible for more than 50% of our income. We are blessed to work with so many people in person, as well as connect with and inspire thousands more through our blog, podcast (The Organized Couple), and social media.

Our path to FI is just getting started. We’ve been lucky enough to meet and learn from so many incredible people along the way and we look forward to spreading the FIRE.

By Nick and Carol Keesey of The Organized Couple