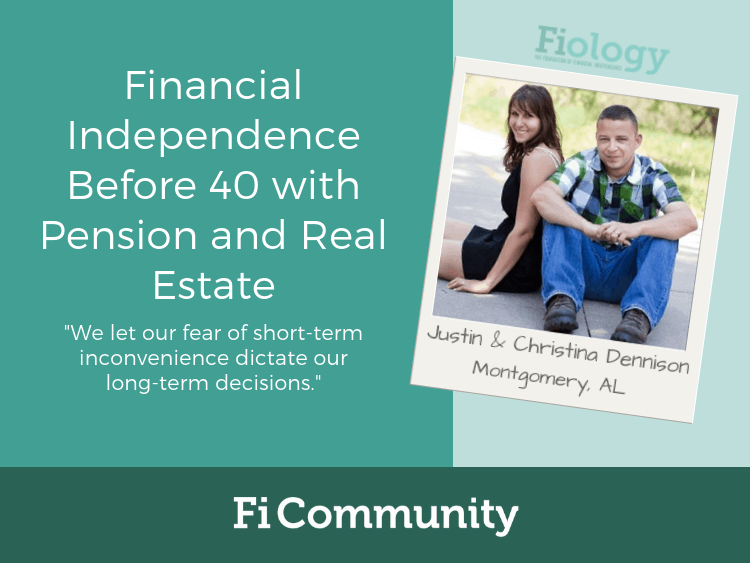 FINANCIAL INDEPENDENCE BEFORE 40 WITH PENSION AND REAL ESTATE

I am an enlisted service member with the U.S. Air Force. My wife is a medical writer with a Ph.D. in neuroscience. We are DINKS (dual income, no kids) and will be financially independent (FI) in April 2020 but will continue working for a little longer in pursuit of “Fat FI.”

Although it has been a 20-year journey, we have only been executing purposeful action with reasoned decisions for about four years. The previous 16 years were spent stumbling through life without focused long-term financial vision or strategy. As you’ll read, we were often just lucky or narrowly escaped disaster.

Not Wanting to Pay Someone Else’s Mortgage

Buying a house didn’t cross our minds until years after we married and even then, I was skeptical about taking on the responsibility of homeownership. We tired of paying someone else’s mortgage and purchased our first single-family residence in Great Falls, Mont.

Three years later, we received short-notice orders to Cheyenne, Wyoming. We were hesitant to rent out the house because I was the only income earner (with a meager E-5 salary) and my wife was a full-time student. We were concerned about covering two mortgages if there was vacancy. We also didn’t have much time to list the house for sale. Fortunately, my wife’s parents—having seen the house—were interested in buying it as a future retirement property. They bought the house in 2008 and successfully rented it out for four years while they lived out of state. We learned two lessons: risk is rewarded and Great Falls has a better-than-expected rental market. We let our fear of a remote short-term inconvenience (possibility of two mortgage payments) dictate our long-term decisions, which impacted our future net worth.

Wanting Someone Else to Pay Our Mortgage

The housing market in Cheyenne was high (low supply, little turnover) and did not appreciate at a high rate. Instead of buying in Cheyenne, we decided to buy in Fort Collins, Colo. Fort Collins had high demand, good turnover and a strong rental market.

In 2015, I received orders again, but this time to a base just outside Denver. We decided—based on my wife’s parents’ success as landlords—to keep the house and turn it into a rental. We wanted someone else to make our mortgage payments for us. We also began to realize the benefit of strong appreciation. At that point, we were transitioning into long-term buy and hold real estate investors…we just didn’t know it yet as we had never heard of that term.

We bought another single-family house in Westminster, Colorado, closer to my new assignment. Prices were getting higher by 2016, but we knew we didn’t want to sit on the sideline paying someone else’s mortgage and miss out on potential appreciation. As it turns out, we unknowingly bought in a good location in a suburb north of Denver that was ripe for future development. The home has appreciated 25% in the three years we’ve owned it. When I received orders to Montgomery, Alabama, we decided to rent this home out as well. We knew this decision would be an appreciation play since the rent-to-value ratio is low in Colorado, but at least someone else is paying the mortgage, most of the expenses, and is thereby increasing our equity.

Shortly after we arrived in Montgomery, we stumbled upon the FI community. We knew I would be retiring after this assignment and would move back to Colorado. We knew my military pension, which will provide a lifetime of passive income, will result in a 50% reduction of my current salary. We decided, because of the reduction of pay I will soon see, we should begin reducing debt. We built a spreadsheet to track our income, expenses and investments. We aggressively paid down consumer debt, cut our monthly grocery bill in half, carried a net zero credit card balance, cut cable and negotiated lower cellular and internet service rates. We paid off student loans and began maxing out Traditional IRAs and my wife’s 401k.

We then began aggressively paying down the mortgage on the Fort Collins house. The idea was to pay it off so that we could use the rent to help pay down the Westminster mortgage and thereby effectively remove one mortgage payment’s worth of monthly expenses. The plan was coming together until I read “The Richest Man in Babylon” by George S. Clason, which changed our strategy.

Putting our Money Back to Work

We knew I would need to produce more income to maintain our current standard of living. We were doing well by this point at saving what we earned and reducing expenses, but not at increasing earning or generating passive income streams. We had a golden goose in the Fort Collins house that was laying eggs. It was passively building equity for us. However, what we wanted were more geese. Since 2010, the Fort Collins house had appreciated 89% of what we paid for it. We didn’t like having trapped equity sitting idle and wanted to put it to work without killing the goose. We were sitting at a Loan-to-Value (LTV) of 7% when we refinanced to an LTV of 75%. We took 55% of the return and invested it in a total market index fund at Vanguard. We put 29% of it in a high-interest online savings account to use for future capital expenses. We then used the remaining 16% as a downpayment on a quadplex in Montgomery at a 75% LTV.

We understood the efficiencies of scale a multi-family residential property has over a single-family property and knew the local market had a high rent-to-value ratio. We found a desperate owner trying to liquidate their holdings. The quadplex was 50% occupied. We paid $40k less than its appraised value and less than 50% of what a single-family home costs in Colorado. The mortgage payment is 75% of the market value of just one unit. Two occupied units cover all expenses—including future vacancy and capital expenses—and produce $130 per month cash flow (5.9% cap rate). The remaining two units, once occupied, will provide another $1500 cash flow per month (16% cap rate).

My blue-collared parents worked until their 60s. They grew up poor but found success through frugality. They worked as long as they did out of fear of declining health and increasing medical expenses. They were afraid to spend their money for fear they wouldn’t have enough. How do you spend after 40+ years of saving? We want to take a different path: a path that will afford us the ability to “retire early” while we still have the health and ambition to travel, explore and pursue hobbies.

We’ll likely sell the Fort Collins house using the remaining equity as a downpayment on our retirement home in Ouray and buy another quadplex in the Southeast using cash savings. We’re going to hang on to the Westminster house for another 5-10 years because we believe there is more appreciation to be gained in that area and it will help to diversify our holdings. After military retirement, I will leverage my education and get an airport management job. Since Christina works remotely, we can live wherever high-speed internet is available.

With our consumer debt eliminated, we’ll use the cash flow of the two quadplexes to help payoff the mortgage in Ouray. The rental cash flow will be a solid source of passive income to supplement my passive income pension, which I will receive from age 39 until death. Because our expenses are low, we’ll invest excess into our IRAs and brokerage accounts. Once the mortgage is paid off, Christina and I will comfortably quit wage-earning work and pursue hobbies such as backpacking, trail running and volunteering at the local animal shelter and search and rescue.

By Justin and Christina Dennison