From Typical Work Day To Living Life Your Way 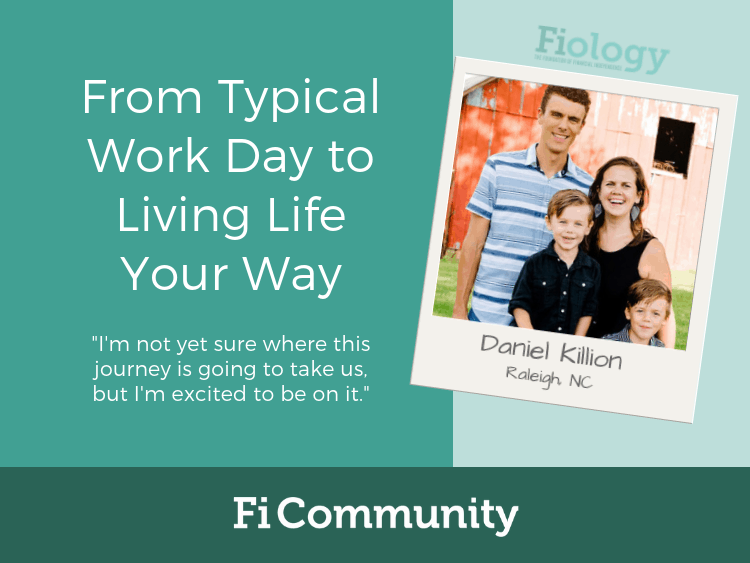 I have what most would consider to be an amazing job. I make more money than I probably should, I have more time off than most, I have a lot of autonomy in the work I do, and my coworkers are overall great people. But this June I will be ending my 15 year career as a product development engineer that provides me all these fantastic benefits. Most people will think I am crazy for doing this. Am I?

First, a quick summary of my situation and financial past: I am 38 years old, have been married 12 years and have two boys (7 and 5 years old). My wife has been a stay-at-home mom since our oldest was born. When we first got married, we were terrible with our money and built up nearly $40,000 in bad debt. Fortunately, we discovered Dave Ramsey early on and started making smarter decisions that got us out of debt relatively quickly.

For the next several years, we stayed out of debt and never spent more than we earned. We felt we were doing well. As with most people in this country, we let our lifestyle inflate along with our income. While I consistently contributed the company match to my 401K and put a few extra dollars in savings when convenient, we missed out on years of additional saving and investing potential. Nonetheless, we were still able to build an above-average level of overall savings.

During this time, my uneasiness with my job was growing. I was spending nearly half of my waking hours dedicated to it. As a result, I would typically see my kids only one to two hours each day during the week. Lately, I also need to travel more extensively internationally. While this has been interesting, it is very disruptive to my family and social life. These sacrifices could be considered worthwhile if I felt the work was important and aligned with my core values. Unfortunately, it doesn’t.

So, why not just find another job that does? That was my intention about three years ago. At the time, I felt I needed to maintain my same level of income just to cover our “normal” living expenses. However, after months of searching, I was struggling to find the right job that would provide fulfilling work and comparable pay. A new job also would not likely reduce the amount of time required to perform the work, so I wouldn’t be able to see my wife and kids any more than I do now.

During this search, a good friend pointed me to Mr. Money Mustache where I discovered the concepts of frugality and Financial Independence (among many other things). My mind was blown. Here was a guy who was thriving, raising a family, living a happy and content middle class life at a fraction of the cost of mine. He wasn’t achieving this through depravity, but rather through a different mindset and habits.

Each article unlocked an idea or concept that I felt like I had always known deep down to be true, but had let years of marketing, social norms and peer pressure convince me otherwise.  For the first time in my adult life, I started to really understand the trade-offs I was making with my time and energy for money. I started to see the true value of money and how it could be used as a tool to achieve my goals, rather than used to just acquire stuff that wasn’t providing happiness. I ultimately realized that the trade-offs I was making to maintain my lifestyle were not worth it to me.

By late 2016, I was ready to start making drastic changes to better align our finances with my values. I was ready to sell the house, slash our budget by 40% and sell things we didn’t need. The problem was, I had hardly mentioned any of this to my wife. While I was guzzling the Financial Independence Kool-Aid, she was blissfully living the same lifestyle we always had.

I did most things wrong in trying to introduce the idea of Financial Independence to my wife and bring her on board with the idea. As a result, it was a nearly year-long process that we struggled through trying to get back on the same page with our financial and life goals. After many challenging conversations, therapy sessions and compromises, we came to a point where we were again driving toward a shared goal. While we still didn’t agree 100% on everything (and never will…), we both agreed that some major changes were needed.

I was more than ready to find a new job at this point. Yet, as we incorporated more and more frugal principles into our life and got smarter with our finances and investing, I began to see that Financial Independence was actually a lot closer than I thought possible. We could be Financially Independent in two years or less – if I kept working at my current job and we sold our house. I made the decision to stick it out at work.

I recently informed my manager of our upcoming plans. While he was shocked and disappointed that I was planning to leave, he also was supportive and had a lot of good things to say about what I had done for the company. I was nervous going into the conversation. By the end, it was like having a conversation with a friend. I felt very good about my decision to give three months notice so they could adequately plan for my transition. I am leaving on the best possible terms.

What the Future Holds

So, then what? Selling the house is on hold for now. At the end of June, my family and I will be spending seven weeks travelling through the U.S. and Canada. We will be visiting family and friends, camping, staying at Airbnbs and hopefully creating amazing new family memories. When we return, I will work on getting caught up on things I haven’t had time to do in the last decade. It is going to take some time to decompress from 15 years of solid full-time employment.

At some point, I do plan to generate income again. I love working and being productive. But it will be work that is meaningful to me and does not limit my involvement in the family. My wife may do the same after our youngest starts kindergarten later this year. I’m not yet sure where this journey is going to take us, but I’m excited to be on it. There is one thing of which I am certain: one day I will be 80 years old reflecting on my life and I am not going to regret taking this chance to change the trajectory of my family’s life forever.